It really began when I was young. I loved to run. I ran like a wild child in the fields near our home in Poland. When we were in the city I dashed up and down the busy streets of Łódź, much to the chagrin of my terrified mother. Even when I was in the house, I would run from room to as my mother would yell, “Zachowywać się jak panienka!” It seemed like I was a born runner and it was a trait I continued to hone as I grew up.

After I moved to the States, I began to actively run. Not only for my physical health, but my mental health as well. My run was the one time during the day that I was able to collect my thoughts, plan the rest of my day and be a little more introspective. As my feet hit the pavement, a jolt of excitement would course through me. On certain days, I felt like I could run forever. When I knew my run was coming to an end, I actually felt a little tinge of sadness. I enjoyed the ache, the adrenaline and the mental acuity so much, it made it difficult stop running. As soon as I finished, I felt refreshed and alive. 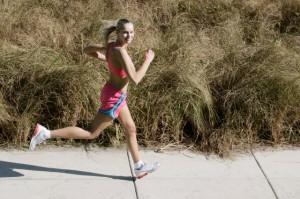 It wasn’t until high school that I really became obsessed with running. My freshman year, I joined the track and cross-country teams. I formed an immediate bond with my cross-country coach, since he was the only other person I had ever met who loved running as much as I did. As soon as class was over, I was the first one in the locker room. Long after we had packed up our equipment, I was still hanging around discussing my run with our coach. Cross country running was heaven for me. Every day, I looked forward to practice. The courses kept me in phenomenal shape and my self-confidence, which had been sorely lacking due to my recent move from Europe, grew in leaps and bounds. Being on the team allowed me to make friends who shared similar interests and I began to date one of my fellow teammates, which gained me even more access to the different groups in high school.

When I graduated from high school, I was too involved with my studies to take part in university athletics. Though it made me sad to see that chapter of my life come to a close, I realized that I could continue to run when I had downtime. Mornings were the best time for me to run and I would record my notes to listen to while I dodged downtown traffic. No matter the weather, my schedule or my physical status, I would try to fit a run into my day. After each run, while I was coming down from my “runners high,” I would feel so sexy! Even if I looked at myself in a mirror and saw that I was visibly flushed, sweaty and my hair was in shambles. It never ceased to amaze me how wonderful each run made me feel. 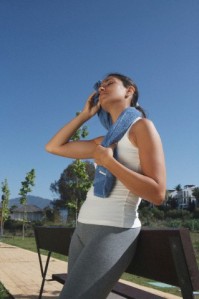 Though I have gotten older (not THAT much older mind you), I still try to run everyday. I keep track of my runs via Map My Run and aim for 50 miles a week. If I am not able to meet my 50 mile goal, I try to run further the following week to make up for it. I have a few favourite runs, particularly my 7.50 mile Strand run, which takes me along the beach. I run that route quite often and try to get others to go along so they can see how much fun it is. I don’t have very many running partners though!
One of the things I love about being able to track my runs is the statistical aspect of it. Breaking down my performance into pretty, logical numbers makes my heart skip a beat. To show you what I mean, here is a sexy breakdown of 2012 so far… 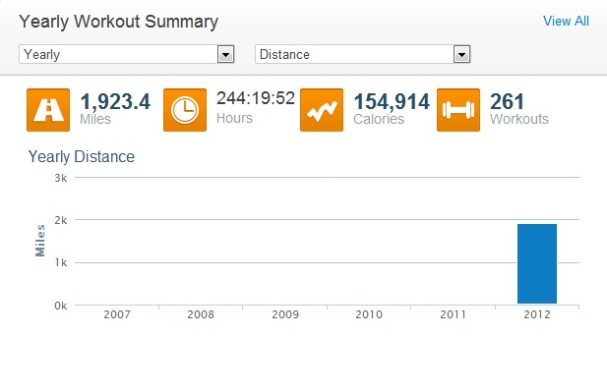 So far this year I have run 1,923.4 miles. Which means that, if I was an enterprising lass, I could have run from Los Angeles, CA to Kansas City, MO to see family. If the weather in California held up, I could even enjoy the gorgeous scenery of my current state and run the length of the coast and back.

Based on the 244 hrs, 19 min and 52 secs I have now run, I could have flown around the world almost 5.5 times (if I didn’t have to refuel and based on the 550 mph avg of a commercial jet). I could have also completed a little over 80 transsphenoidal procedures for pituitary adenomas, barring complications.

The number of calories I have burned, would allow me to eat 53 plates of the #1 Worst Food in America or 276 servings of Haagen Dazs Creme Brulee Ice Cream (my favourite).

I wish I would have always tracked my runs. I can only imagine the amount of time I have spent running up to this point. I haven’t always averaged 50 miles per week, so I don’t have a consistent number to base anything on. This coming year, I plan to up my weekly goal to 60 or even try to make my monthly goal higher. 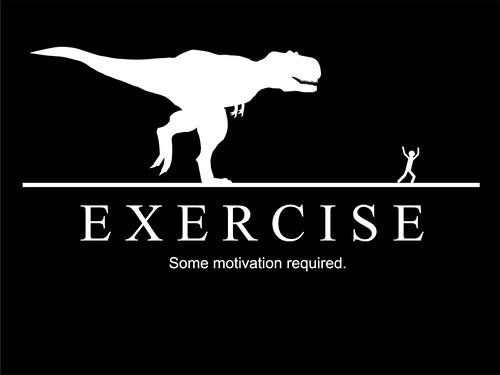 Question: What about my fellow runners, do you have any stories to tell? How far do you average a week? month? year?

This entry was posted in Personal and tagged 50 mpw, health, healthy, map my run, run, runner, running. Bookmark the permalink.